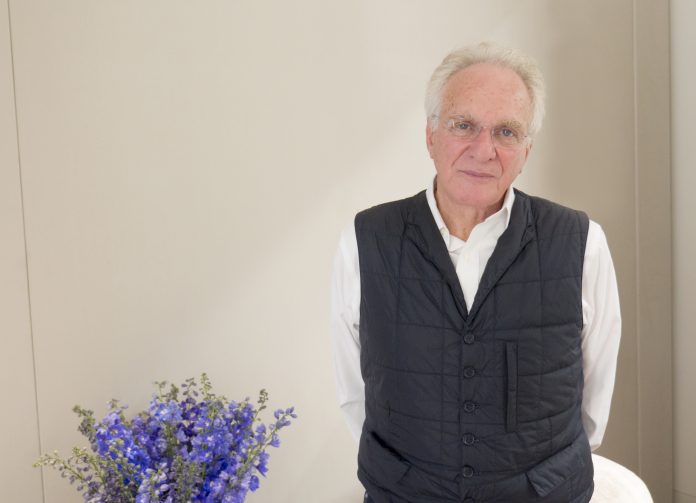 I had the distinct pleasure of meeting a man full of humble thoughts and humble beginnings. The now, world-famous, luxury brand owner, David Yurman greets me as I walk into one of the private shopping rooms of Holt Renfrew in downtown Vancouver. His courteous demeanour and friendly smile could put any journalist at ease.

We get comfortable in two lounge chairs across from each other and I pull out my notepad prepared to ask him a list of questions.  Little did I know that I wouldn’t even feel the need to glance at the list once.  I began with the most obvious statement/question: “so, you are a sculptor and your wife is a painter. How does a sculptor ….”, only to be interrupted immediately by David’s wise response.

“Well, it’s interesting when you say that my wife is a painter.  My wife paints. I’m not a sculptor, I sculpt. The things that we do are not really saying that’s what we are.” I knew at that moment that this was going to be anything but a boring interview; that I would be walking out of the room full of knowledge and wisdom.

When David and his wife, Sybil, first met he was just totally absorbed and driven to be just a sculptor rather than to sculpt.  They were in their 20s and met in a very exciting creative moment: 1969, a huge year for counter-culture revolutions, breaking down barriers, women’s liberation, the Beatles, the Stones, the Vietnam War, and of course, the “make peace not war” movement. They were very much involved in their own art and connected with each other at a sculpting studio where David was a manager, making his own sculptures.

After 10 years of being together, during a period when David was struggling to make sculptures transform into jewelry. He shares, “I was making sculpture jewelry and I was selling mostly to art galleries and select craft artisan shops across the US and probably doing 25 – 50 craft shows, packing up the 1962 Cadi, loading all the stuff up and backdrops. I was making a living doing craft fairs.”

That was 1980. Today, there are over 40 locations that the company owns and approximately 260 shop-in-shop type locations such as the one in our very own Holt Renfrew. David chuckles at my comment about that amazing growth with a simple “yeah, it’s gotten big!”

Did he imagine that he would ever grow to be so big? His response: “Of course, not! Who imagines such a thing?” and further explains that he grew up in a time when the religion was to be an existentialist. To just live one experience after the next.

As he continued to attend trade shows and sell to art galleries, his ability to handle the business on his own was declining. His dyslexia caused confusion and he needed help. He needed help hiring people that could do the finishing and the setting. With the help of his wife Sybil, who lent his business a serious amount of money and the much needed help, David was able to grow.

“We started our business with $500 from a Jewish Free Loan Society on Hendrick Street and both our parents had to co-sign,” David chuckles as he reminisces about the past. “In 1980, we said okay, this is a real business. We moved from the country- we were making everything up in the country out of pretty much a barn- and we moved to the city, where it’s a jewelry center and the caster’s around the corner and all our buyers were there in New York City and one of our sales associate said you have a tiger by the tail, just hang on.”

“This isn’t brain surgery. No one is dying here. We’re just making beautiful things where people have the inclination and the connection to what we’re doing and say “I really like this” and what we make, there’s a lot of love in that and concern.”

We continue to talk about the details that the craftsmen and all the members of his company pay attention to.  David jokes about his habit of micromanagement and with that I move on to ask him what his desire is.

“I think that my desire in the business was to afford myself and the people that work for me just a great place to work; just to find love and happiness as they work in the environment.  The building that we are in now, we’ve rebuilt it three times and we’ve only been there 12 years.  We’ve moved up and down, moved all our distribution and warehousing away, so it’s centered somewhere else, which was a logistical effort. It opened up a huge amount of space; we have almost 250,000 sq ft in Manhattan and 85 – 90k sq ft. for distribution. The jewelers have the most incredible light, huge space, they are the happiest.”

Not only does David look after his craftsmen by providing excellent lighting and space, he provides an organic juice bar for all 4 floors, yoga and other such benefits to keep his team fit and happy. He claims that it’s out of selfishness because he wants to support the design or the creative concept, to do the best job possible, so that they have the best results. He likes to do more and he can’t do more unless he has good sales and he can’t have good sales unless he has good product and good communication. But by now I can also see that he’s just a good-hearted fellow, looking after his people.

We speak about his first piece, which was a direct welded belt. It was his gift to Sybil.  The inspiration? “The inspiration was she forgot her belt. We were in my loft and she said – I need a belt for this dress and I said – oh no problem, I’ll just weld you one. No problem; I started at 8 and I was done at 11. We missed the party but she got a belt.”

We move on to share his theory on color and why his ads were in black in white until last year.  He explains that art is about a message. It’s about what’s the feeling you want to express.  The choice of black and white was the strongest message.  That color is confusing. There’s so much going on. It’s too attractive.

“Think of the great movies,” he says. “Think of Casablanca and great photographers.  Black and White. Because you really get the emotion in black and white not a lot of confusion and distraction of color. Not to say that color isn’t good but wanted to get the message with black and white.”

But that art form was enough, he agrees. 15 years of black and white come to an end as now it is a different moment. It is color and it suits the jewelry they are now making. It is quite different.  It’s called Supernova and for which my wife did the initial design and I completed it.

“It’s exuberant. There’s something called PureForm that has this beautiful shape.  We wanted playfulness.  We chose the model and the photographer, it was based on one thing. The product.  Not to say that the black and white wouldn’t be nice but I wanted to see the gold and the silver in motion.   And now we’ll be doing more film.  Vignette films. It’s going to be fun and it’s actually going to be in theatres.”  He shares a story of one of the vignette film ads we’ll get to see in theatres with a little girl who is crying, Christmas trees and fun.

“It’s something that I wouldn’t have even thought of and I’m so delighted that I’m not micromanaging it and that’s what they think of what I designed as a creative design.  I think they are doing a coloring book too.  A little fantasy book too,” he further shares with excitement in his eyes.

I ask him to wrap up with a quick little message for our readers.  Anyone who has a desire to be the next David Yurman, what would he say to them? Here is what David Yurman says had to say.

From a sculptor, to a businessman, to a regular meditator, this is David Yurman. The man behind the luxury brand.

The Man Behind The Bling