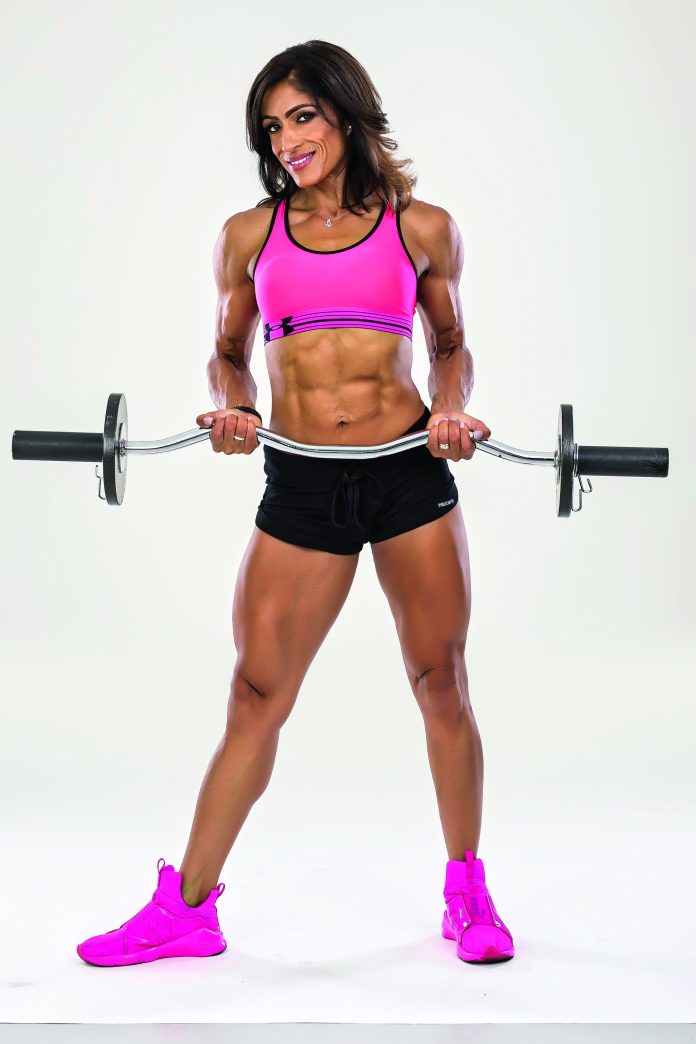 “Mom!” Ayden continued watching his mom as she lifted the glass yet again, wiped the counter, and placed the glass down for probably the 100th time in a row. “MOM!” He got her attention; she looked up at the 13-year-old who met her with a warm smile which was wise beyond his years. Reminded that she was caught in another one of her endless cycles that was triggered by her OCD, she put down the cloth and exhaled.

At some point in our lives, most people will have temporary fascinations, fixations or ‘obsessions’ with people, places or things. But for one in 50 Canadians, their lives are transformed into a constant series of repetitive unwanted thoughts, worries and behaviours that they cannot control. It is a more serious mental illness called Obsessive-Compulsive Disorder, and it’s something that bodybuilder and fitness coach Bindi Bains Mackoruk is all too familiar with.

“Sometimes, people don’t understand what it’s like to be in my shoes,” she says. She delved into a story of her high school days when she would come home and re-write her class notes again and again until they were flawless. Little did she know at that time that it was the onset of what would later become OCD. “I was ashamed of it for years. I would hide it because I knew it wasn’t ‘normal’.” The condition is a set of learned behaviours which become habitual when associated with relief from anxiety. It is genetic and can be triggered by trauma and stress.

The condition is usually coupled with another disorder such as depression but in Bindi’s case it comes with an involuntary tick that is out of her control. Bindi began noticing it in her late 20’s more and more, recalling a time when she was late to a function due to removing a stain on her shirt, or being awake at night because of the compulsive thinking, repeating like a broken record in her mind. After her mother passed away, she caught herself in a vortex of towel folding for 20-30 minutes just to get the corners to align perfectly, which was when she decided to finally seek professional help.

“My mom also suffered from OCD,” she shares openly, “but it wasn’t until she died that I became more aware of my own symptoms. I feel guilty that I didn’t talk to her about her illness and struggles. But that’s the thing, it’s just not in our culture to openly discuss things like this.” She shared another story from her teenage years of ongoing episodes her mother had and how she and her siblings watched in silence. “We knew that we were enabling her by not stepping in, but we don’t regret it because it was easier on her and the family to just let her finish her compulsions,” she said.

“Mental illness is just another illness, just as cancer is an illness, and it’s more common that people think,” she explains, claiming than one in five Canadians suffer from a mental illness. “My kids grew up seeing me exhibit this unexplainable and ‘abnormal’ behaviour. They would ask me why I repeated things and so I made it a point to communicate with them about the illness, and what they can do to help me if I get stuck in another cycle. They should understand because genetically, they may be prone to developing it later in life just as I did.”
Strong of mind and spirit, Bindi is a force to be reckoned with and has not let her OCD be an excuse for achieving success. Her fitness journey began after her first child, when she decided to kick the baby-weight and get into shape. Today, she holds five national body building titles in the Figure category and runs an eponymous fitness and nutrition company.

“My message to women, especially South Asian women, is that it’s possible to get into shape after kids. Raising kids is hard, and women often lose themselves in their kids and family, becoming overwhelmed and unmotivated which can often lead to depression. All of this makes getting physically fit a far reach,” she says, adding that her clients who are largely South Asian women often come to her looking for change. “Weight-loss supplements are helpful, but they should be coupled with a fitness routine and healthy diet. You need to get into the gym or have some form of activity to shed the weight and feel better about yourself.”

Along with being a mother of two teenage boys, running her own company and helping her sister Davi Bains-Gill with promoting her fashion label Armaan, Bindi follows a regimented cognitive behavioural therapy schedule that involves medication, support groups, and counselling. “It took opening up about me having this affliction that helped me deal with it,” she shares. “My clients understand that if I twitch or organize the weights on the rack, that it’s part of my condition, and that it’s ok. And I explain it to my new clients so that they aren’t surprised halfway through a workout.”
Bindi’s passion didn’t end there, she forged ahead to be a co-founder of the Sahaara Canada Wellness Society along with client-turned-friend, Deljit Bains. The third annual Sahaara Gala took place May 11 where 100% of the proceeds will be donated to help mental health initiatives and programs in the community. “Two-thirds of those affected avoid seeking help due to the negative societal attitudes and lack of understanding by the general population. This invisible barrier preventing individuals from asking for support can often, in turn, prevent the support from being readily available. We just wanted to bring awareness to this and help those in need.”

A trailblazer and beacon of hope for many, Bindi’s courage to come forward is commendable. Today, she stands as an esteemed member of the community despite the challenges that she has faced, a heavy-weight by her own right. Her advice to those blazing their own path to success is, “try to be comfortable with being uncomfortable. And try not to be afraid, just trust yourself and it will all fall into place.”

For those that may struggle with self-esteem issues, feel down and out due to being misunderstood, or even those who think that they can’t make a difference in the world can all take a lesson from Bindi who despite the challenges, continued on course with focused determination to inspire us all.262

Delta Rise: A 37 Story House Above All

Best restaurants with patio in Vancouver