Bhangra…the beat droppin’, body poppin’, party rockin’ tunes made their way to the masses through stars like Sukhshinder Shinda, Babbu Maan, and Daler Mehndi who exploded onto the music scene in the 90’s, all inspired by legends like Gurdas Maan even before that. Their tracks were (and still are) undoubtedly spinning at every wedding, party, and Punjabi household across the globe.

Western influences of pop and hip-hop gave birth to the next gen of internationally acclaimed superstars like Jazzy B. Having released fourteen official albums, six unofficial albums, and appeared in 7 films as himself, it’s no wonder that Jazzy B is recognized as a global icon and the Crown Prince of Bhangra.

2016 was a great year for him – he earned a star on Granville Street in Vancouver for entering the BC Hall of Entertainment Fame, the first South Asian to hold this rank. Along with the great honour, he hit mainstream global audiences with his old school song Sat Rangey (with music by Sukhshinder Shinda) when it appeared in Hollywood blockbuster film Deadpool starring Ryan Reynolds, which is the highest grossing R-rated film of all time ($783.1 million). If you’re curious, it’s playing during the taxi cab ride while Deadpool and Dopinder discuss how to get Geeta back.

To add to his impressive roster are umpteen PTC Punjabi Music Awards and Brit Asia TV Music Awards for his vocals, albums, songs, music videos, and costumes. It’s hard to believe that this global icon lives right here in Surrey, BC. 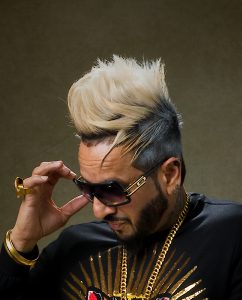 His super-VIP status finally caught the eye of the local media last year when he won a Darpan Extraordinary Achievement Award and 100 Year Journey Award just two weeks apart from one another.

Born Jaswinder Singh Bains in Nawanshehr, Punjab, he moved to Surrey, BC with his family when he was just 5-years old. He realized his talent and passion for music earlier on – he released his debut album Gugiyan da Jora in 1993, the same year he graduated from Princess Margaret Secondary School in Surrey. At the behest of his mentor Sukhshinder Shinda, he moved to England with the aim to make a career out of music. Needless to say, the move paid off. With an estimated net worth of $50 million and counting, Jazzy B is just starting to get his stride.

He recently celebrated his 44th birthday with his wife Hardeep Kaur and their two children in an intimate gathering of close family and friends. We caught up with him to get the scoop on the life and times of a celebrity.

Q. You’ve been married for 18 years. What would you say is the secret to a happy marriage?
Patience, understanding, and honesty. We both put everything on the table. We may not see eye to eye on everything just like most couples, but she really is my best friend.

Q. Do your kids know that their dad is the famed Jazzy B?
(laughs) they know but not to the full extent of the span of my career and popularity of the music. I want them to have a normal upbringing, that singing just happens to be the job that their dad does, and that it’s no different from any other job, which is why I am so private. They play with their friends whose parents obviously know, and they respect us enough to maintain boundaries that are really important to me. So no, people don’t rush to our house for autographs or anything, but I’m also very careful about being out in public with them. 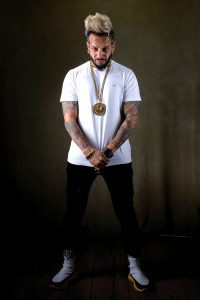 Q. You travel back and forth between England and Vancouver quite often, not to mention being on tour, filming music videos, and the like. How do you balance your work and family life?
My wife knows that my first love is music! (laughs) But seriously though, it used to kill me when the kids were really young and I missed out on important pieces of their childhood, or even my wedding anniversary. My wife is my partner in every way that counts. I’m serious about my work but my family always comes first, and they know that.

Q. Do you ever face negativity from people that don’t like your sound or vibe?
I do read all of my messages, and negative messages come with the territory. What really upsets me is when people get personal and attack my children and family through text. Is there really a need for that? My music has nothing to do with disgruntled fans personally attacking my kids.

Q. What do you do to get through the negativity? Because everything you say and do is watched.
I may look every bit modern with my tattoos but I’m sentimental – every tattoo means something special and I recall that meaning when I’m feeling a bit down. I’m also very spiritual, I believe in the teachings of the Sri Guru Granth Sahib and do paath every day. I still do ardaas every time I go on stage, and I never drink when I’m doing a show, I feel it disrepects the stage which God blessed me to perform on. He could take it away just like that so I’m very strict in this regard. I believe that staying positive and having the blessings of God are key to remaining calm through any situation.

Q. What would you give up in an instant if you could have a “normal” life?
I would go back in time and would spend more time with my parents. I lost my mom recently and it has left a hole in my heart that I just can’t seem to fill. I was always too busy trying to make it in life, there was always a show or a recording or something that seemed so much more important than spending time with my parents and now, it’s too late. See this tattoo? (points to neck) This is my mom, she is always with me.

Q. What have your learned about yourself that you can share with your fans?
I’m still learning every day. The most important thing is to enjoy the moment. We focus so much on negative scenes in the past, or on the future that we lose today. We really just need to enjoy the moment. Every time I perform, I do so as if it’s my last performance. I get that from my dad, every time he walked into the room, I felt the positive energy.

Q. What things in life are still a mystery to you?
Honestly, I have seen and done a lot more in life than I ever imagined. Now, I want to create a legacy that I can be remembered by, something that is bigger than any one person. In my mom’s honour, I created the Shotee Maa Foundation where we aim to do outreach and bring communities together without passing judgement – just as my mom did. My mom was a giver, she helped so many people. She was a happy person and she inspired me so much to use my access to give back and help others.
I’m working on a documentary about the foundation with the hopes that it will create a movement in society.

Q. What do you hope to achieve through the Shotee Maa Foundation?
To be honest, Princess Margaret was a battleground for Surrey kids and a breeding ground to enter the gang and drug lifestyle. Although things change or evolve, the cycle just keep going around, and here I am a parent with the same fears as any other parent – that our kids are safe and learn the value of hard work and relationships. It’s not just in Surrey, I’ve seen it all over the world where kids want to make “quick money”. So, this was the biggest motivator for me to create a platform that gives without judgement and involves sport and community to get kids engaged.

I have also seen people who have nothing, there’s so much poverty in this world and I have achieved so much – I find it so fulfilling to help those in need. So, by accessing the success I have achieved so far, why not do some good in the world?

Q. What is Soccer Tennis?
(laughs) We aim to start Shotee Maa fundraising through a sports tournament for the youth, and one that honours my dad Gurmail Singh Bains. Soccer, field hockey, and basketball are already being done by several different organizations, so we thought of soccer tennis. Originating in Europe, it’s basically soccer but played on a tennis court. As it’s a relatively new sport over here, we are looking forward to having players all be at the same level. The tournament takes place on July 20 at Kennedy Park in Surrey.

Q. What message would you like to share with our readers?
Work hard. Slow and steady wins the race. It took me 8-10 years to gain my first success. I also had a mentor – Kuldeep Manak who taught me to face my fears head-on. If you are struggling, it’s your mentor that will keep you on track to help you reach your goals. And don’t forget to dream because you can’t achieve without dreaming the impossible. To the youngsters out there – respect your elders and spend more time with them before it’s too late.