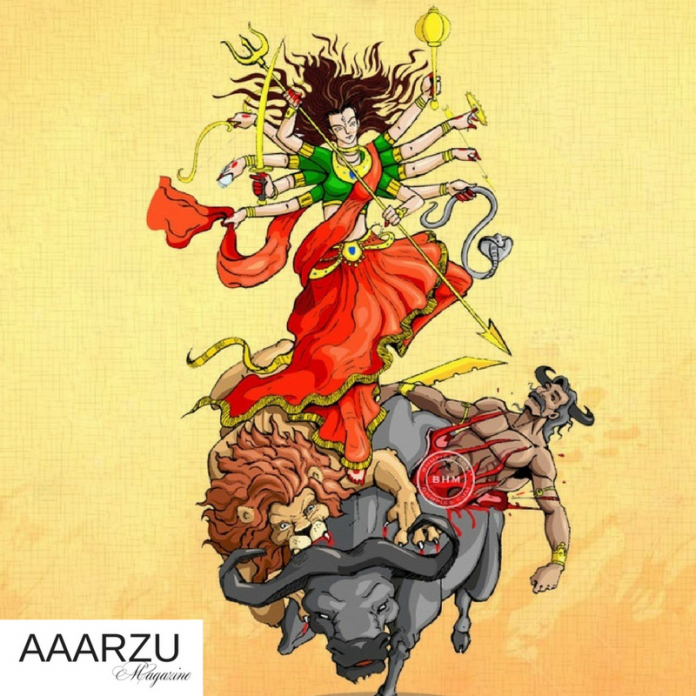 Many Indian households and communities across the world, and in India (of course), held festivals where a ten-headed demon was burned by a man chosen to portray the Hindu God Vishnu’s incarnation as Ram.

I belong to one of those households.  Our grandfather would bring home jalebis (an Indian sweet) to celebrate the end of Ravan, the ten-headed demon.

It wasn’t until most recently that I learned about this festival and how it’s celebrated in the Eastern region of India, most prominently in Kolkatta. It is referred to as Vijayadashami.  A day when the Hindu Goddess, Durga, killed the bull-headed demon, Mahishasura. Naturally, this got me thinking.  So, I turned to my best friend – Google.  I typed in “Dussehra” and looked in the images section.  Then, I typed “Vijayadashami” and looked in the images section again.   What did I find? Mostly pictures of Ram killing Ravan.  The most dominant significance of this day.

From the past few years, this day has also come to signify the victory of good over evil. Slogans of banishing the evil within have become more and more popular, thanks to social media. But, why aren’t the slogans of women empowerment a part of this? It’s 2017 and yet we still don’t recognize an ancient, mythological thought that a woman could be so powerful that she could kill a demon who threatened all the male deities residing in heaven. A thought that is more modern than we could conspire today. We’ll celebrate the Goddess’ nine incarnations with dancing and fancy clothing but we won’t reenact her glory on day ten of the festival.

Along with my heartfelt wishes that you all have an amazing Dussehra in your homes comes this request that this Dussehra you would take a moment to teach your children, especially your son, of the story of Durga’s conquer over Mahishasura.  Teach your children that a woman is no less than a man in any field. That a woman is more than just a catalyst of entertainment or pleasure. That she is more than a great arm candy.  That she is a WOMAN.  A goddess of sorts and a complete powerhouse capable of bringing down the biggest of demons.

Do you brush your teeth for long? Avoid